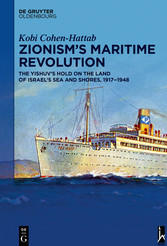 Zionism's Maritime Revolution - The Yishuv's Hold on the Land of Israel's Sea and Shores, 1917-1948

Zionism's Maritime Revolution - The Yishuv's Hold on the Land of Israel's Sea and Shores, 1917-1948

Research on Jewish settlement of the Land of Israel in the modern era has long neglected the sea and its shores. This book explores the Yishuv's hold on the Mediterranean and other bodies of water during the British Mandate in Palestine and the Zionist 'maritime revolution,' a shift from a focus on land-based development to an embrace of the sea as a source of security, economic growth, clandestine immigration (haapala), and national pride. The transformation is tracked in four spheres - ports, seamanship, fishery, and education - and viewed within the context of the Jewish/Arab conflict, internal Yishuv politics, and the Second World War. Archives, memoirs, press, and secondary sources all help illuminate the Zionist Movement's road to maritime sovereignty. By the State of Israel's founding in 1948, the Yishuv had a flourishing nautical presence: a national shipping company, control over the country's three active ports, maritime athletics, fish farming, and a nautical training school.