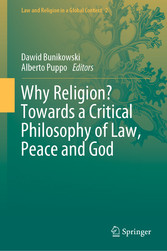 Why Religion? Towards a Critical Philosophy of Law, Peace and God

Why Religion? Towards a Critical Philosophy of Law, Peace and God

This book examines the relation between religion and jurisprudence, God, and peace respectively. It argues that in order to elucidate the possible role religion can play in the contemporary world, it is useful to analyse religion by associating it with other concepts. Why peace? Because peace is probably the greatest promise made by religions and the greatest concern in the contemporary world. Why jurisprudence? Because, quoting Kelsen's famous book 'Peace through Law', peace is usually understood as something achievable by international legal instruments. But what if we replace 'Peace through Law' with 'Peace through Religion'? Does law, as an instrument for achieving peace, incorporate a religious dimension? Is law, ultimately, a religious and normative construction oriented to peace, to the protection of humanity, in order to keep humans from the violence of nature? Is the hope for peace rational, or just a question of faith? Is religion itself a question of faith or a rational choice? Is the relatively recent legal concept of 'responsibility to protect' a secular expression of the oldest duty of humankind?
The book follows the structure of interdisciplinary research in which the international legal scholar, the moral philosopher, the philosopher of religion, the theologian, and the political scientist contribute to the construction of the necessary bridges. Moreover, it gives voice to different monotheistic traditions and, more importantly, it analyses religion in the various dimensions in which it determines the authors' cultures: as a set of rituals, as a source of moral norms, as a universal project for peace, and as a political discourse.

Dawid Bunikowski, born in northern Poland, residing in Finnish North Karelia, has a Doctor of Law (from Nicolaus Copernicus University). He is a philosopher of law and pursues cross-disciplinary research. He cooperates with the University of the Arctic (as Leader of the Sub-group of Philosophy of Law), Cardiff Centre for Law and Religion and the University of Eastern Finland. His research interests include legal theory, law and morality, law and religion.
Alberto Puppo is Professor of Legal Theory at the ITAM Law School (México). He holds a doctorate in Analytical Philosophy and General Theory of Law from the University of Milan. He is the author of Acceptation et normativité: la force du devoir dans le discours juridique and the co-author, with Sévane Garibian, of Normas, valores, poderes. Ensayos sobre positivismo y derecho internacional. His main field of interest is international legal theory, especially Kelsen's theory.