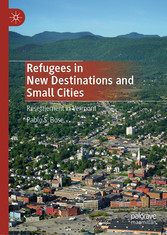 Refugees in New Destinations and Small Cities - Resettlement in Vermont

Refugees in New Destinations and Small Cities - Resettlement in Vermont

For the last two decades, refugees, like other immigrants, have been settling in newer locations throughout the US and other countries. No longer are refugees to be found only in major metropolitan areas and gateway cities; instead, they are arriving in small towns, rural areas, rustbelt cities, and suburbs. What happens to them in these new destinations and what happens to the places that receive them? Drawing on a decade's worth of interviews, surveys, spatial analysis and community-based projects with key informants, Dr Pablo Bose argues that the value of refugee newcomers to their new homes cannot be underestimated.

Pablo S. Bose studies migration and urban environments. His research is interdisciplinary in nature and his main focus over the past thirty years has been on refugees and resettlement in North America and Europe, on cities of the global south, and on environmental displacements across the world.