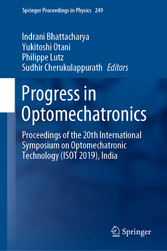 This book presents peer-reviewed articles from the 20th International Symposium on Optomechatronic Technologies (ISOT 2019), held in Goa, India. The symposium brought together students, researchers, professionals, and academicians in the field of optomechatronics and related areas on a common platform conducive to academic interaction with business professionals.

Dr. Indrani Bhattacharya is presently associated as a postdoctoral researcher with the Institute of Photonics, University of Eastern Finland, Joensuu and and a project coordinator in JFK Photonics Education Path under PREIN, the Finnish Flagship Program of Academy of Finland. She was previously associated with Prof. Ayan Banerjee of Light-Matter Interaction Lab, Indian Institute of Science Education and Research, IISER, Kolkata and Prof. Vasudevan Lakshminarayanan of School of Optometry and Vision Science, University of Waterloo, Canada as a freelance postdoctoral researcher. She received Ph.D. in Technology from the Department of Applied Optics and Photonics, University of Calcutta.   Dr. Bhattacharya has 20 years of Industry and 10 years of Academic experiences. Her research areas include point spread function engineering, optical tweezers, diffractive optics, biomimetics in-vivo and in-vitro biomedical applications and optical fiber devices. She is a life member of the Optical Society of India and member of International Society of Optics and Photonics (SPIE), European Optical Society (EOS) and the International Society of Optomechatronics (ISOM).
Prof. Yukitoshi Otani is a professor at the Center for Optical Research and Education (CORE), Utsunomiya University, JAPAN. He received his doctorate degree from the University of Tokyo in 1995.  He was a visiting professor at College of Optical Sciences, the University of Arizona from 2004 to 2005. He joined CORE in April 2010. He is also a technical adviser at Imaging Div, Photron Limited since 2011. His current interests include polarimetry and optomechatronics. He is a fellow of the SPIE since 2010.Prof. Yukitoshi Otani is currently chair and technical advisor of several international and national conferences like the International Symposium of Opto-mechatronic Technologies (ISOT) and several SPIE conferences related to Dimensional Optical Metrology, Inspection and Interferometry. He has been director of the Japanese Society for Precision Engineering and secretary of the Japanese Polarization Science and Engineering Group.
Philippe Lutz joined the University of Franche-Comté, Besancon, as Professor in 2002. He was the head of the research group 'Automated Systems for Micromanipulation and Micro-assembly' of the AS2M department of FEMTO-ST Institute from 2005 to 2011. He was the Director of the PhD graduate school of Engineering science and Microsystems with more than 400 PhD students from 2011 to February 2017, and he is currently the head of the Doctoral College. Since January 2017, he is the director of the AS2M Research department of FEMTO-ST. His research activities at FEMTO-ST are focused on the design and control of micro-nano systems, microgrippers, micro-nano robots, feeding systems and micro-nano manipulation, assembly stations, and Optimal design and control of piezoelectrically actuated compliant structures. P. Lutz received several awards of IEEE, authored over 90 refereed publications (50 in high standard journals), serves as associate editor for the IEEE Transaction on Automation Science and Engineering and as Technical Editor for the IEEE/ASME Transactions on Mechatronic, is member of several steering committees and is member of the IEEE Robotics and Automation Society (RAS) Committee on Micro-Nano Robotics.
Dr. Sudhir Cherukulappurath obtained his PhD in non-linear optics from the University of Angers in France. He is currently an assistant professor in the department of Physics at Goa University, India. His research interests are in the area of Plasmonics, Optical tweezers, Surface enhanced Raman scattering (SERS), luminescent functional nanomaterials.